Seahawks-Patriots is the best rivalry in football 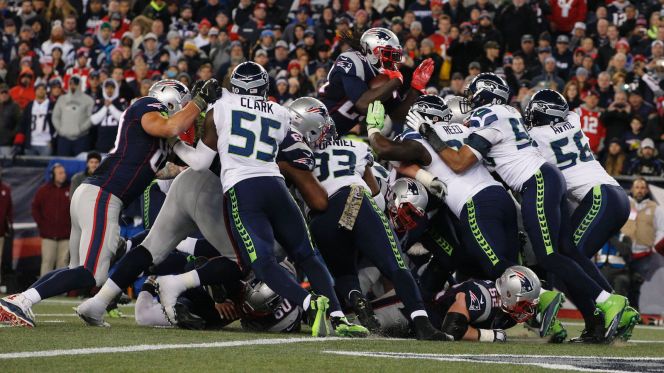 At the New England 1, Russell Wilson, down four points, throws for Ricardo Lockette at the goal line; New England defensive back Malcolm Butler is there. Interception. One of the best Super Bowls ever is over. Patriots win 28-24.

At the Seattle 1, Tom Brady, down seven points, throws for Rob Gronkowski in the end zone; Seattle defensive back Kam Chancellor hand-fights him. Incompletion. One of the best games of the year is over. Seahawks win 31-24.

A 1 a.m. phone call is never good, unless it’s a scenario something like this: It comes after a great football game, and the guy on the other end just scored three touchdowns in the House That Kraft and Belichick and Brady Built.

“How poetic,” a reflective Seattle wide receiver Doug Baldwin said from the Seahawks’ bus as it motored to the airport from Foxboro 75 minutes after Seattle’s 31-24 victory. “Incredible, really. They had the opportunity to win at the one-yard line at the end of the game. I thought of that, looking back … It’s one of those special moments you won’t forget. Football’s special, so special. How poetic this is.”

Baldwin said “poetic” twice, and I think if I’d let him talk about it for a while longer, he’d have said it a couple more times. He seemed blown away by the coincidence and the drama and about exactly what Seattle had accomplished capping a great day of football. In a brutal scheduling quirk, the NFL had the Seahawks play Monday night at home, travel 2,687 air miles to New England on Friday, and play the best team in football on Sunday -- and the Patriots were as well-rested as you can be, coming off a bye week. The Seahawks’ defense had been worn down, having played 90, 72 and 82 snaps, respectively, in a three-game, 16-day span coming into Foxboro Sunday night. Seattle came back from deficits of 7-0, 14-12, 21-19 and 24-22 to win.

This was a magnificent game. Did you watch it all the way through? I’m guessing not, seeing as NFL ratings entering Sunday were down an alarming 15 percent across the board. This was a magnificent TV day, in fact, for the beleaguered NFL. Sunday was one of those days you could have put in a DVR time capsule with the label: OPEN WHEN BORED. In the early window, you’ll see the craziest win-turned-loss of the year, with the first ending of its kind in NFL history: Denver 25, New Orleans 23. You’ll see the Chiefs, at Carolina, with the Panthers’ season on the line, score the final 17 points of the game in the fourth quarter to win 20-17. In the late-afternoon window, you’ll see rookie running back Ezekiel Elliott force himself into the lead of the MVP race in a game with seven lead changes; Dallas 35, Pittsburgh 30. And at night, you’ll see another MVP candidate, Russell Wilson, outduel Tom Brady in Foxboro in a breathtaking game of great plays.

When Sunday was over, these were the three things I think I thought right away:

• Seattle-New England is the best rivalry in football, and it’s not close; what do you mean they won’t play again except in a Super Bowl till 2020?

• A Seattle-New England Super Bowl is a distinct possibility.

• Russell Wilson is as dangerous a quarterback as any in the NFL, with the softest touch, and the perfect risk-reward combination a quarterback can have.

Wilson and Brady dropped so many beautiful throws into the hands of receivers throughout the game. Just before the half, with New England up 14-12, Wilson and Baldwin drew up a thing of beauty. This is the risk-reward thing I’m talking about. No timeouts left for Seattle. Seahawks’ ball at the Patriots’ 18, with 13 seconds remaining. Clearly, Wilson has one play left and then a field goal try if the Seahawks don’t score. But he can’t take a sack, and he can’t leave the ball in the field of play.

“What happened,” Baldwin said, “is so against Football 101.”

Wilson took the shotgun snap and looked, looked, pirouetted out of trouble to the left … :11 … :10 … “Better be careful,” Cris Collinsworth sing-songed on NBC.

As he faded left, against the grain, Wilson looked. And there was Baldwin, going away from Wilson, fading toward the right pylon at the goal line. “That’s against every rule of football,” said Baldwin. “In a scramble drill like we were in, you move with the quarterback. You don’t want to go away from him, so he’ll be under pressure and have to throw across his body farther to you.”

Why’d Baldwin do it? Simple. All the Patriots’ defenders, amoeba-like, were forming around Wilson, and Baldwin knew Wilson would see him with no one behind him and enough of a cushion without coverage in front of him. With nine seconds left, Wilson calmly launched a rainbow all the way across the field to the goal line, and with six seconds left, it nestled into Baldwin’s hands. Touchdown. “That’s a great illustration of Russell’s ability to see the field and use great judgment,” Baldwin said.

Five times, by my count (including the final points of the night, a 15-yard strike floated into Baldwin’s hands for a touchdown), Wilson dropped a perfecto into the hands of his receivers at least 15 yards downfield. The man’s got a gift, and I don’t care if he was the 75th pick in the draft four years ago, or that he’s 5-foot-11. Russell Wilson’s in the conversation for best quarterback in football. Today. This game he played, against the rested best team in the NFL, bordered on a mensa level.