Two killed in shooting in Germany's Halle, one suspect arrested 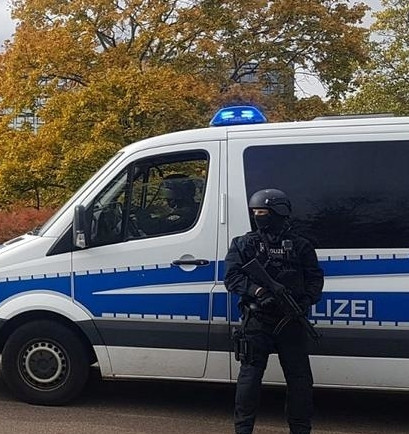 Two people were killed in a shooting in the eastern German city of Halle on Wednesday, two others were seriously wounded and police said they had detained one person. A synagogue and a Turkish restaurant were targeted, local media and witnesses said.

Mass-selling daily Bild said the shooting took place in front of a synagogue, and that a hand grenade was also thrown into a Jewish cemetery. Police confirmed that two people died in the gun rampage.

Two other people were also seriously wounded during the shooting, a hospital said. "We have two seriously injured people with gun wounds," Jens Mueller, spokesman for the Halle university clinic, told AFP. "They are in surgery."

Federal prosecutors are taking over the investigation after the shooting, magazine Der Spiegel said on its website, a procedural step that indicates a possible link of the attack to terrorism under German law.

Gun rampage during the holiest day in Judaism

The violence occurred on Yom Kippur, the holiest day of the year in Judaism when Jews fast for more than 24 hours, seeking atonement.

Police had earlier said the "perpetrators fled in a car" before saying later that one suspect had been caught. It was not immediately clear whether there were other assailants.

"Our forces have detained one person," local police said on Twitter. "Please nonetheless remain vigilant." Earlier, police tweeted: "According to initial findings, two people were killed in Halle. There were several shots."